If you are a member of the Star Wars: The Old Republic community on social media, you may have seen some new Theron Shan hashtags trending since the latest game update, Crisis on Umbara, launched last month. In that expansion, a central player companion, Theron Shan, was revealed to be the very traitor to the Eternal Alliance that the player has been seeking since Iokath, that mysterious cloaked figure who has presumably been operating against the Outlander and her allies right under their noses for some time.

This news stunned players, many of whom have spent literally years with Theron as a cherished companion or romance partner. The dashing Republic Strategic Information Service agent has been a huge fan-favourite since he swaggered into the game in the 2014 Expansion Shadow of Revan. The character first appeared in the “Lost Suns” comics series in 2011 that was released as a tie-in to the nascent SWTOR MMORPG.

Theron comes with a substantial pedigree; he descends from Revan himself. His mother is the famous Jedi Grand Master Satele Shan, and his father was later revealed to be the Great Galactic War hero Jace Malcom. Theron’s adventures have been further chronicled in the 2012 novel “The Old Republic: Annihilation” by Drew Karpyshyn as well as continuing within all subsequent additions to the SWTOR videogame. 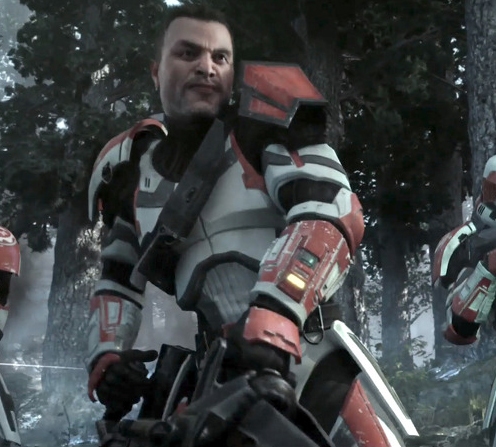 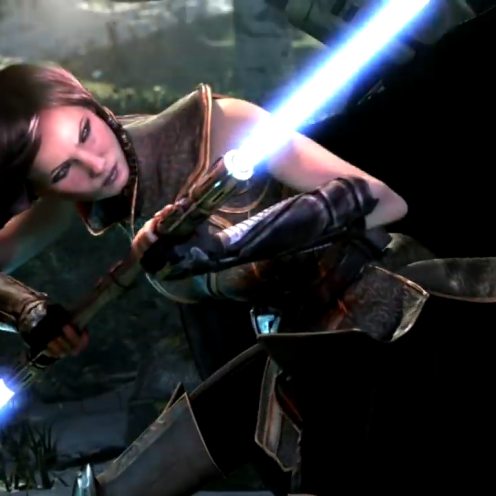 Player reactions to Theron’s admission that he was the traitor in the Alliance were strong, sometimes angry or hopeless. But quite a few people (this author included) felt that perhaps there was more at play than a face-value betrayal. After all, Theron’s sixteen-plus years of stalwart devotion and service to the Republic and then to the Eternal Alliance, which was established in the early days of fratricidal Emperor Arcann’s reign over Zakuul, surely demonstrate both strong moral convictions and a loyal nature. 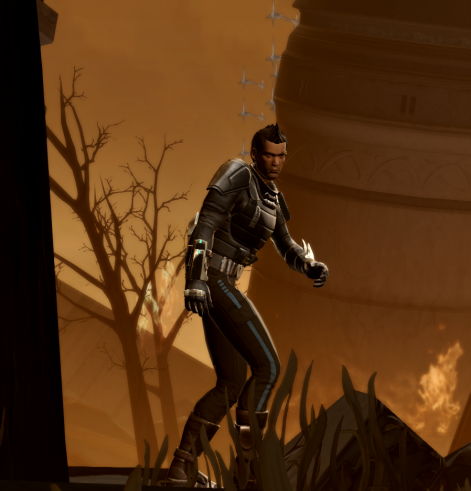 So naturally, many players rejected the idea of Theron as the backstabber. But perhaps none so passionately as members of The Red Eclipse server SWTORFamily Guild. Members of this guild and other SWTOR players on Twitter formed a chatroom for discussing ongoing story developments and from there, a grassroots movement was born: The Theron March on Odessen. I had a chance to speak with Mel, AKA Dreadful Sanity, who gave birth to idea of players gathering in-game to show solidarity and belief in their beloved and trusted friend, Theron Shan.

I have seen some hashtags on Twitter referencing belief and trust in Theron Shan after he was revealed as the traitor to the Eternal Alliance, a fact that stunned the SWTOR community. Can you tell me about those, how they came about and what they mean to you personally?

When it was revealed that Theron is the traitor (still can’t believe that really happened), my character was (still is) heartbroken. And since I connect deeply with my characters, especially my Scoundrel main, I was heartbroken. The hashtags are a result from the theory, that Theron is kinda undercover. That he’s not really a traitor. I blogged about it. [see Mel’s Blog post here] Plus two tweets from Charles [Charles Boyd, creative director] Trust was the main theme of Umbara and Sam [Sam Wallschlaeger, writer] Hang in there. There are too many inconsistencies (and Theron is partly extremely OOC). That’s why we still believe in him. I have to say that, if Theron is really a traitor, that would be a gamebreaker for me. It’s a very emotional reaction not everyone understands (my husband couldn’t handle crying me for a few days *lol*), but that’s what it would be… for me.

Can you tell me a little bit about the event you held on The Red Eclipse server for Theron Shan? What was the motivation and what were your goals as a group?

The event was a crazy idea I actually had in the middle of the night while going for little smugglers. *cough* Since I’m not really the organizing type I asked my guildies for help and guidance and within an afternoon, we came up with the idea to rally and show the people behind swtor that we care. Deeply. Sure, it would have been much more impressive if Odessen would have been full of red-jacket toons, but at peak time we were about 25-30 people (plus companions *lol*) and I was blown that so many came. Goal was to show our support and since at least Charles has acknowledged our event, it was a success. 🙂

Was there a dress code? What type of activities took place during the event? How did you advertise/spread the word?

Dress code was Theron’s jacket. For those who couldn’t afford it we said that any red jacket would do. I made a pretty flyer that we shared here on Twitter and tumblr. One of us went into the official forums. I thought about doing another shoutout on the fleet, but that would have been an awful spoiler for those who could avoid them so far, so I decided not to.

What was the overall mood? Happy, hopefully, frustrated, angry, etc?

Overall mood was happy. We had a lot of fun even when a troll tried to spoil that. And we had a gorgeous Lana who supported and protected us. ❤

Is there a sense from the participants that Theron will be vindicated in later chapters of the story? Do you hope to influence the writers to take the story in that direction?

Yes, we all hope that Theron will be vindicated later. Of course it would be great if we could influence the writers, but I’m sure the story is done. Intern I mean. That doesn’t mean one should be silent when it comes to matters we care about. And we care deeply (I already said that, right ^^) about Theron. He is a great character and trashing him for the sake of a story twist would make me pretty angry.

What was your favourite thing that has happened as a result of these hashtags and the in-game event?

One favorite thing is/are the new and wonderful people I’ve met during the event and even before through the discussion. And have I mentioned that Charles called the event “outstanding”? 😉

Personally, the event was pretty special for me. The hashtags being used as well. Both have allowed parts of the community to really band together and “fight” for this amazing character. It helps make our collective voice loud and clear, to the developers, that we love Theron and we want him back. It has also introduced me to some pretty amazing people that I have developed wonderful friendships with. – SWTOR player and Theron fan, Cipher Mandy 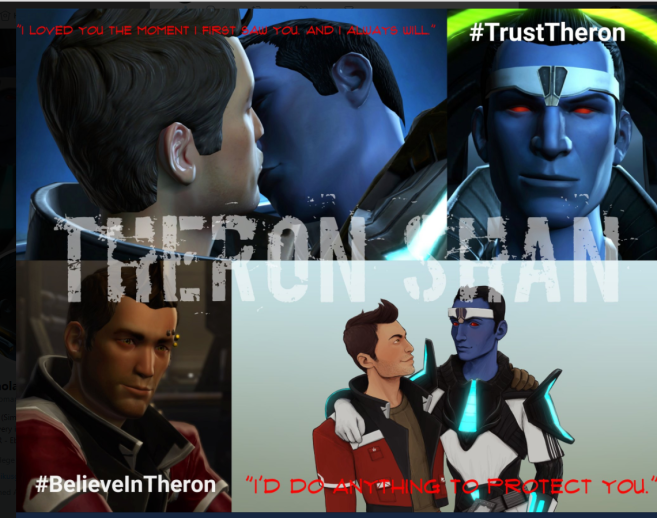 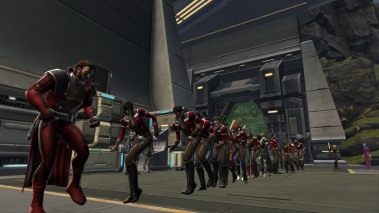 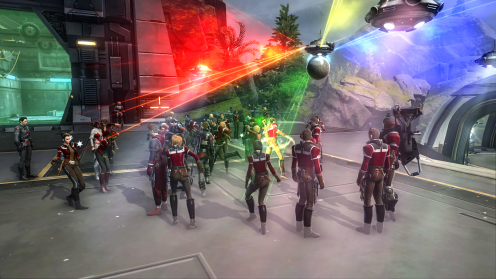 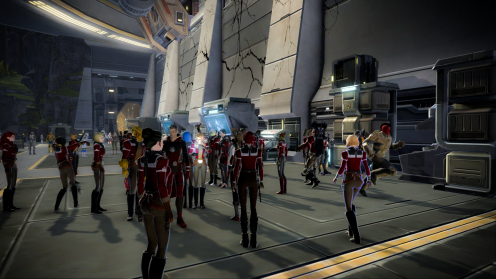 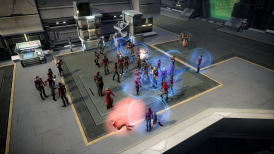 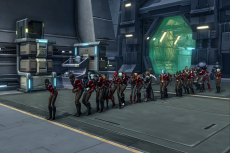 Album featuring screenshots from several members of the community who took part in the ingame event (thanks to @Quinny_Imp, @psofomar, @TheTheronShan @CipherMandy and @DreadfulSanity as well as all the community members featured in the photos!)

I hope you enjoyed this article. What do you think about the Theron situation? What is your view on player-created events and community within SWTOR? Have you seen events like this one on your server? Please leave a comment!